How To Grow Potatoes in Arizona

You are here:
Gardening In Arizona 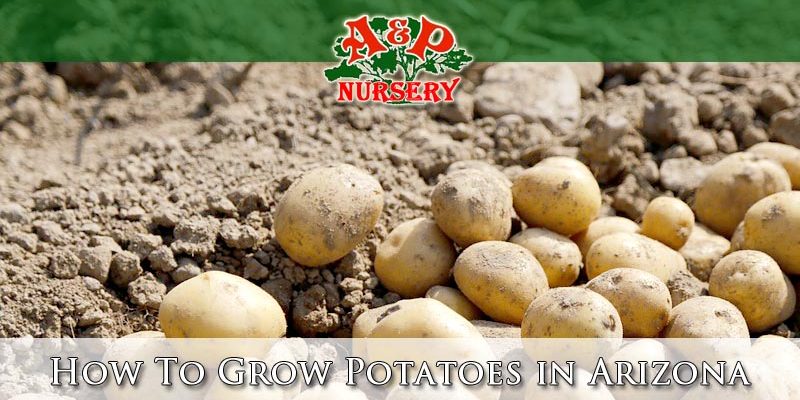 If you’re searching for a guide on How to grow potatoes in Arizona this post is for you!  Potatoes are cool-season crops that provide various minerals, vitamins, and protein. The best time to plant are early spring, and late fall.

Origin Of The Potato

It’s not really known exactly how potatoes got from Andes to Ireland, but prior to disaster striking the potato was firmly rooted in Irish soil. It as grew and part of culture for centuries.

During 1846 to 1847, Ireland was hit by an unseasonably cool and wet year, with millions of tons of potatoes becoming rotten due to an opportunistic fungus. It also resulted in thousands of deaths and tens of thousands of emigrations. This event has become known as the Great Potato Famine, and could be the only drastic human catastrophe named after a plant.

It does not matter how you pronounce ‘potato’, it is likely that the birthplace is considered to be Ireland. However, potatoes actually originated on the other side of the world, in South America’s Andes mountains.

Thousands of years ago, wild potatoes were discovered by early Incan tribes and were considered life-sustaining storehouses for nutrients and energy. Using the environment that had less alkaline and humidity in the soil, similar to that of the Southwest U.S, they were able to domesticate more than 100 varieties.

When considering the per unit of land, a potato provides more calories and protein than other grown foods. They are able to store many vital minerals and vitamins as well.

When To Grow Potatoes in Arizona

The potato plant will grow best during late fall or early spring as days are warm, but have cooler nights. While being a cool-season crop, edible sections of the potato are under the ground, while the tops are above ground and unable to handle frost. Therefore, timing the planting of potatoes is important.

You will need to plant them early as possible to obtain the most crop possible before summer heat kicks in, or the winter cold takes the plant.

Within Phoenix, AZ the month of March is an ideal planting time for potatoes, or in late September. However, within Albuquerque, NM or Denver, CO the potatoes should be ordered in, and ready for planting in mid-late April.

Soil: Potatoes often do better in loose acidic soil that is well-drained. Because of the alkaline in Southwestern soil, compost should be added to the area to assist with acidifying the soil. Also, soils with heavy alkaline or poor drainage can result in undersized and lower yielding crops.

Fertilizer: The potato plant requires fertilizer during the early stages of growth, therefore, apply the majority of your fertilizer prior to planning. You should ensure the fertilizer is balanced. If pre-planting applications are missed, you should wait to fertilize until after sprouts begin producing leafs.

Light: A minimum of six hours of light is required by the potato plant, full sun.

Water: For the best possible yields, you want to maintain an evenly damp soil, not wet. You want to allow some drying prior to watering again.

Starting: For larger seed potatoes (bigger than a chicken egg), you want to cut them into pieces, roughly 1 inch across. Once being cut, allow the seed potato to heal/cure for several days prior to planting, or it could rot underground.

Each of the pieces need at least one bud (eye) where stems grow. If possible, having two eyes would be better. Potatoes that are egg size or smaller are able to be planted whole.

Selecting: You want to ensure that you buy seed potatoes that are certified disease-free from a trusted online catalog, mail in catalog, or garden market to get the best results. You should avoid planting potatoes bought at the supermarket due to being less vigorous and easier for them to become diseased.

A&P Nursery For All Your Gardening Needs

With 4 east valley locations our team can help you find the perfect trees and plants to take your landscape from ordinary to extraordinary.  In addition to selling trees and plants we partner with companies that will plant your trees or plants and care for them as long as you wish.  That means all you need to do to get your landscape looking it’s best is stop by and browse our trees, choose your favorite, and leave the rest of the work to the pros.

Call or stop by one of our 4 locations today!

How to plant strawberries in Arizona
July 7, 2022

Growing The Ocotillo In Arizona
July 7, 2022